If you are adapting an existing open textbook, the adaptations you make will be released with whatever open license you choose, while the rest of the book will be released under the license of the original book. In other words, you need to respect the license of the original work. You cannot license what you do not create. You can only attach a CC BY (Creative Commons Attribution), or other open license to the parts of the book that you have created and are new.

However, there is a “catch.” If the textbook you are adapting has a Share-Alike condition (CC BY-SA 4.0) stipulated, then you must release the entire book using the same license as the original book. 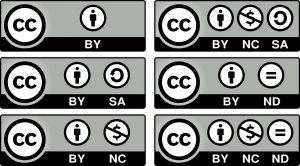 This license lets others distribute, remix, tweak, and build upon your work, even commercially, as long as they credit you for the original creation. This is the most accommodating of licenses offered. Recommended for maximum dissemination and use of licensed materials.

This license lets others remix, tweak, and build upon your work even for commercial purposes, as long as they credit you and license their new creations under the identical terms. This license is often compared to “copyleft” free and open source software licenses. All new works based on yours will carry the same license, so any derivatives will also allow commercial use. This is the license used by Wikipedia, and is recommended for materials that would benefit from incorporating content from Wikipedia and similarly licensed projects.

This license allows for redistribution, commercial and non-commercial, as long as it is passed along unchanged and in whole, with credit to you.

This license lets others remix, tweak, and build upon your work non-commercially, and although their new works must also acknowledge you and be non-commercial, they don’t have to license their derivative works on the same terms.

This license lets others remix, tweak, and build upon your work non-commercially, as long as they credit you and license their new creations under the identical terms.

This license is the most restrictive of our six main licenses, only allowing others to download your works and share them with others as long as they credit you, but they can’t change them in any way or use them commercially.

Faculty OER Toolkit by Shannon Moist is licensed under a Creative Commons Attribution 4.0 International License, except where otherwise noted.