If you were to mix zinc metal and copper ions in a container, this reaction would proceed by itself; we say that this reaction is spontaneous.

One application of redox reactions requires that they be physically separated.

Even though the two half reactions are physically separated, a spontaneous redox reaction still occurs. However, in this case, the electrons transfer through the wire connecting the two half reactions; that is, this setup becomes a source of electricity. Useful work can be extracted from the electrons as they transfer from one side to the other—for example, a light bulb can be lit, or a motor can be operated. The apparatus as a whole, which allows useful electrical work to be extracted from a redox reaction, is called a voltaic (galvanic) cell.

The tendency for electrons to go from one half cell to another is called the voltage of the voltaic cell, represented by E. Sometimes the term potential is used to represent the voltage of a cell. Voltage is expressed in volts (V). The voltage of a voltaic cell is determined by the difference in the tendencies of the individual half cells and is characteristic of a given redox reaction when concentrations are specific (1.0 M for dissolved species and 1.0 atm for gases). Because the voltage of a redox reaction is determined by the difference of the tendencies of the individual half reactions, absolute voltages are unnecessary; only relative voltages of each half reaction are needed. The relative voltage of each half cell is represented as E1/2 and is based on the standard that the E1/2 for the reaction

is assigned to be exactly 0.000 V under standard conditions of pressure and concentration. Table 16.1 “Standard Reduction Potentials of Half Reactions” lists some relative E1/2 values for some half reactions. Note that all half reactions are listed as reduction reactions, so these values are called the standard reduction potentials of each half reaction.

What is the value of E1/2 for this half reaction?

The given reaction is the reverse of this reaction:

What is the value of E1/2 for this half reaction?

To determine the overall voltage of a particular voltaic cell, simply combine the voltages of the oxidation and reduction half reactions. Even if you need to take a multiple of a half reaction for the electrons to cancel, do not take the multiple of the E1/2. Use the values directly as is from Table 16.1 “Standard Reduction Potentials of Half Reactions”.

What is the voltage of a voltaic cell based on this reaction? Is the reaction spontaneous as written?

The overall redox reaction is formed from these two half reactions:

The second reaction is reversed in the overall redox reaction, so its voltage changes sign from the reduction reaction:

To obtain the voltage of the voltaic cell based on the overall reaction, we simply combine the two voltages of the half reactions:

Because the overall voltage is positive, the reaction is spontaneous as written.

What is the voltage of a voltaic cell based on this reaction? Is the reaction spontaneous as written?

The first battery (called a “voltaic pile”) was constructed by the Italian scientist Alessandro Volta in 1800 and was based on the copper/zinc reaction depicted in Figure 16.1 “A Redox Reaction in Which the Two Half Reactions Are Physically Separated”. Unfortunately, it was messy, requiring quantities of copper and zinc salts dissolved in water. In 1866, the French scientist Georges Leclanché invented the dry cell, a precursor to today’s modern battery. A schematic of a dry cell is shown in Figure 16.2 “Dry Cells”. The zinc case and the central carbon rod serve as the anode and cathode, respectively. The other reactants are combined into a moist paste that minimizes free liquid, so the battery is less messy (hence the name dry cell). The actual redox reaction is complex but can be represented by the following redox reaction:

A dry cell has a voltage of about 1.56 V. While common and useful, dry cells have relatively short lifetimes and contain acidic components. They also cannot be recharged, so they are one-use only. Batteries that can be used only once are called primary batteries.

In the late 1950s, Lewis Urry of the Eveready Battery Company in Ohio invented the alkaline battery (still marketed today under the trade name Energizer). Alkaline batteries are similar to dry cells, but they use a basic moist paste rather than an acidic one. Moreover, the net amount of base does not change during the course of the redox reaction. The overall redox reaction is as follows:

Alkaline batteries have the advantage of being longer lasting and holding their voltage better—about 1.54 V—throughout their lifetime.

Some button batteries use a lithium-based redox reaction, typified by this anode reaction:

The actual redox reaction depends on the composition of the cathode and is variable depending on voltage. Lithium batteries can also be used for applications that require more energy, such as portable computers and electric vehicles. Some lithium-based batteries are rechargeable and can be used over and over again; such batteries are called secondary batteries.

The redox reaction produces about 2 V, but it is typical to tie several individual batteries together to generate a larger voltage. The lead storage battery has the distinction that the product of both half reactions is PbSO4, which as a solid accumulates on the many plates within each cell. The lead storage battery is a secondary battery, as it can be recharged and reused many times. Because it is based on lead, these batteries are rather heavy. They should also be recycled when replaced so that potentially dangerous lead does not escape into the environment. Because of their characteristics, lead storage batteries are used to start large engines in automobiles, boats, and airplanes.

A fuel cell is a type of battery in which reactants flow continuously into a specialized reaction chamber, and products flow out continuously while electrons are extracted from the reaction. Because all reactions in a fuel cell consist of a fuel and an oxidizer undergoing a redox reaction, an introduction of fuel cells is at home in a discussion of redox chemistry. 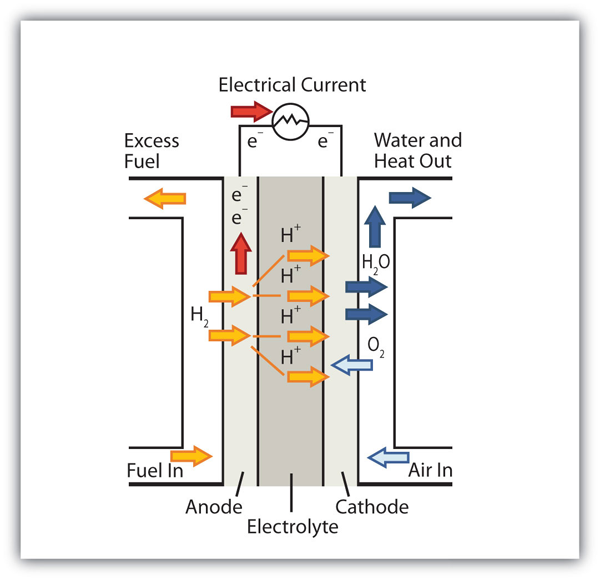 This fuel cell uses H2 as the fuel and O2 as the oxidizer.

By far the most common fuel cell reaction is based on hydrogen and oxygen:

However, fuel cells typically do not work under standard nor even optimal conditions, so they typically generate about 0.6–0.7 V. In this fuel cell, the only two products are water and electricity, so the fuel cell not only does not create pollution but also makes a by-product that in some environments is a valuable commodity (water). Other fuels can be used besides hydrogen; fuel cells have been developed that work on methane, methyl alcohol, ethyl alcohol, carbon-rich materials, and even magnesium metal.

Hydrogen-based fuel cells were and are used to provide electricity for manned space vehicles, partly because their only chemical product is water, which could be used for drinking. However, there has been a recent resurgence in interest in fuel cells because of their potential use in electric cars. Most electric cars run on conventional batteries, which can be very heavy and expensive to replace. It is thought that fuel cells, rather than conventional batteries, might be better sources of electricity for automobiles.

Several current barriers to fuel cell use in electric cars include capacity, cost, and overall energy efficiency. The 2008 Honda FCX, the first production model of a vehicle powered with a fuel cell, can hold 4.1 kg (just under 9 lb) of highly pressured H2 gas and has a range of 450 km (280 mi). It costs about $120,000–$140,000 to build, making the vehicle beyond the ability of most people to own. Finally, it always requires more energy to produce elemental hydrogen as a fuel than can be extracted from hydrogen as a fuel. As such, hydrogen is described as an energy carrier (like electricity) rather than an energy source (like oil and gas). This distinction points out a fundamental argument against fuel cells as a “better” power source.The limitations notwithstanding, there is a lot of interest in fuel cell research. If ways can be found to circumvent their current limitations, fuel cells may become more and more common as power sources. 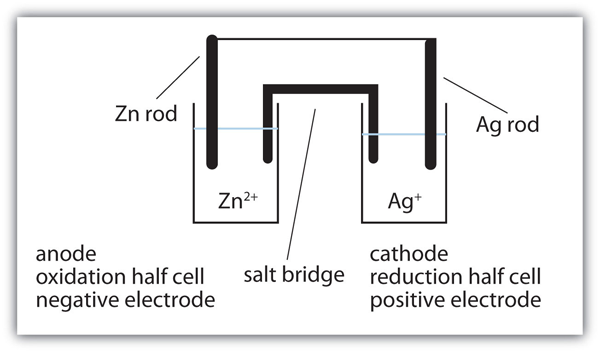