Aromatic hydrocarbons, such as benzene,are flat-ring systems that contain continuously overlapping p orbitals.Electrons in the benzene ring have special energetic properties that give benzene physical and chemical properties that are markedly different from alkanes. Originally, the term aromatic was used to describe this class of compounds because they were particularly fragrant. However, in modern chemistry the term aromatic denotes the presence of a very stable ring that imparts different and unique properties to a molecule.

The simplest alkanes have their C atoms bonded in a straight chain; these are called normal alkanes. They are named according to the number of C atoms in the chain. The smallest alkane is methane:

To make four covalent bonds, the C atom bonds to four H atoms, making the molecular formula for methane CH4. The two-dimensional diagram for methane is misleading, however; the four covalent bonds that the C atom makes are oriented three-dimensionally toward the corners of a tetrahedron. A better representation of the methane molecule is shown in Figure 17.1 “Three-Dimensional Representation of Methane.”

The next-largest alkane has two C atoms that are covalently bonded to each other. For each C atom to make four covalent bonds, each C atom must be bonded to three H atoms. The resulting molecule, whose formula is C2H6, is ethane:

Propane has a backbone of three C atoms surrounded by H atoms. You should be able to verify that the molecular formula for propane is C3H8:

Because alkanes have the maximum number of H atoms possible according to the rules of covalent bonds, alkanes are also referred to as saturated hydrocarbons.

Alkenes have a C–C double bond. Because they have less than the maximum number of H atoms possible, they are called unsaturated hydrocarbons. The smallest alkene—ethene—has two C atoms and is also known by its common name, ethylene:

The next largest alkene—propene—has three C atoms with a C–C double bond between two of the C atoms. It is also known as propylene:

What do you notice about the names of alkanes and alkenes? The names of alkenes are the same as their corresponding alkanes except that the suffix (ending) is –ene, rather than –ane. Using a stem known as the parent chain to indicate the number of C atoms in a molecule and an ending to represent the type of organic compound is common in organic chemistry, as we shall see.

With the introduction of the next alkene, butene, we begin to see a major issue with organic molecules: choices. With four C atoms, the C–C double bond can go between the first and second C atoms or between the second and third C atoms:

(A double bond between the third and fourth C atoms is the same as having it between the first and second C atoms, only flipped over.) The rules of naming in organic chemistry require that these two substances have different names. The first molecule is named but-1-ene, while the second molecule is named but-2-ene. The number between the parent-chain name and suffix is known as a locant, and indicates on which carbon the double bond originates. The lowest possible number is used to number a feature in a molecule; hence, calling the second molecule but-3-ene would be incorrect. Numbers are common parts of organic chemical names because they indicate which C atom in a chain contains a distinguishing feature. When the double bond (or other functional group) is located on the first carbon, it is common practice for some authors to leave out the locant. For example, if  butene were written without a locant, you should assume it refers to but-1-ene, not but-2-ene.

Based on the names for the butene molecules, propose a name for this molecule.

Based on the names for the butene molecules, propose a name for this molecule.

Alkynes, with a C–C triple bond, are named similarly to alkenes except their names end in –yne. The smallest alkyne is ethyne, which is also known as acetylene:

Propyne has this structure:

With butyne, we need to start numbering the position of the triple bond, just as we did with alkenes:

Benzene is an aromatic compound composed of six C atoms in a ring, with alternating single and double C–C bonds:

The alternating single and double C–C bonds give the benzene ring a special stability, and it does not react like an alkene as might be expected.

Hydrocarbons are rather unreactive, but they do participate in some classic chemical reactions. One common reaction is substitution with a halogen atom by combining a hydrocarbon with an elemental halogen. Light is sometimes used to promote the reaction, such as this one between methane and chlorine:

Halogens can also react with alkenes and alkynes, but the reaction is different. In these cases, the halogen molecules react with the C–C double or triple bond and attach onto each C atom involved in the multiple bonds. This reaction is called an addition reaction. One example is

The reaction conditions are usually mild; in many cases, the halogen reacts spontaneously with an alkene or an alkyne.

Hydrogen can also be added across a multiple bond; this reaction is called a hydrogenation reaction. In this case, however, the reaction conditions may not be mild; high pressures of H2 gas may be necessary. A platinum or palladium catalyst is usually employed to get the reaction to proceed at a reasonable pace:

2. What are the three different types of aliphatic hydrocarbons? How are they defined?

3. Indicate whether each molecule is an aliphatic or an aromatic hydrocarbon. If it is aliphatic, identify the molecule as an alkane, an alkene, or an alkyne. 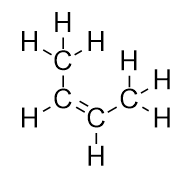 4.  Indicate whether each molecule is an aliphatic or an aromatic hydrocarbon. If it is aliphatic, identify the molecule as an alkane, an alkene, or an alkyne.

5.  Indicate whether each molecule is an aliphatic or an aromatic hydrocarbon. If it is aliphatic, identify the molecule as an alkane, an alkene, or an alkyne.

6.  Indicate whether each molecule is an aliphatic or an aromatic hydrocarbon. If it is aliphatic, identify the molecule as an alkane, an alkene, or an alkyne. 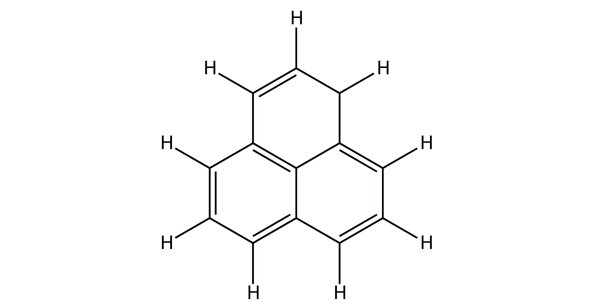 7.  Name and draw the structural formulas for the four smallest alkanes.

8.  Name and draw the structural formulas for the four smallest alkenes.

9.  What does the term aromatic imply about an organic molecule?

10.  What does the term normal imply when used for alkanes?

11.  Explain why you may see prop-1-ene written just as propene.

12.  Explain why the name but-3-ene is incorrect. What is the proper name for this molecule?

13.  Name and draw the structural formula of each isomer of pentene.

14.  Name and draw the structural formula of each isomer of hexyne.

15.  Write a chemical equation for the reaction between methane and bromine.

16.  Write a chemical equation for the reaction between ethane and chlorine.

17.  Draw the structure of the product of the reaction of bromine with propene.

18.  Draw the structure of the product of the reaction of chlorine with but-2-ene.

19.  Draw the structure of the product of the reaction of hydrogen with but-1-ene.

20.  Draw the structure of the product of the reaction of hydrogen with pent-2-ene.

21.  Write the balanced chemical equation for the combustion of heptane.

22.  Write the balanced chemical equation for the combustion of nonane. 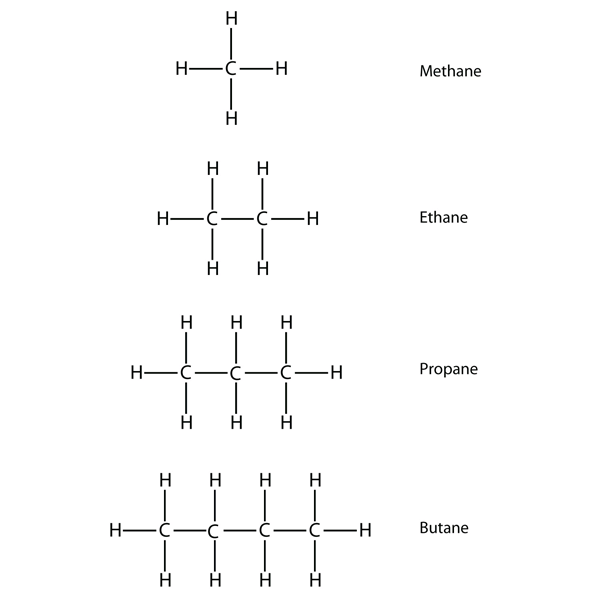 11. The 1 is not necessary since the double bond is on the first carbon.