Most pure nitrogen comes from the fractional distillation of liquid air. The atmosphere consists of 78% nitrogen by volume. This means there are more than 20 million tons of nitrogen over every square mile of the earth’s surface. Nitrogen is a component of proteins and of the genetic material (DNA/RNA) of all plants and animals.

Under ordinary conditions, nitrogen is a colorless, odorless, and tasteless gas. It boils at 77 K and freezes at 63 K. Liquid nitrogen is a useful coolant because it is inexpensive and has a low boiling point. Nitrogen is very unreactive because of the very strong triple bond between the nitrogen atoms. The only common reactions at room temperature occur with lithium to form Li3N, with certain transition metal complexes, and with hydrogen or oxygen in nitrogen-fixing bacteria. The general lack of reactivity of nitrogen makes the remarkable ability of some bacteria to synthesize nitrogen compounds using atmospheric nitrogen gas as the source one of the most exciting chemical events on our planet. This process is one type of nitrogen fixation. In this case, nitrogen fixation is the process where organisms convert atmospheric nitrogen into biologically useful chemicals. Nitrogen fixation also occurs when lightning passes through air, causing molecular nitrogen to react with oxygen to form nitrogen oxides, which are then carried down to the soil.

All living organisms require nitrogen compounds for survival. Unfortunately, most of these organisms cannot absorb nitrogen from its most abundant source—the atmosphere. Atmospheric nitrogen consists of N2 molecules, which are very unreactive due to the strong nitrogen-nitrogen triple bond. However, a few organisms can overcome this problem through a process known as nitrogen fixation, illustrated in (Figure). 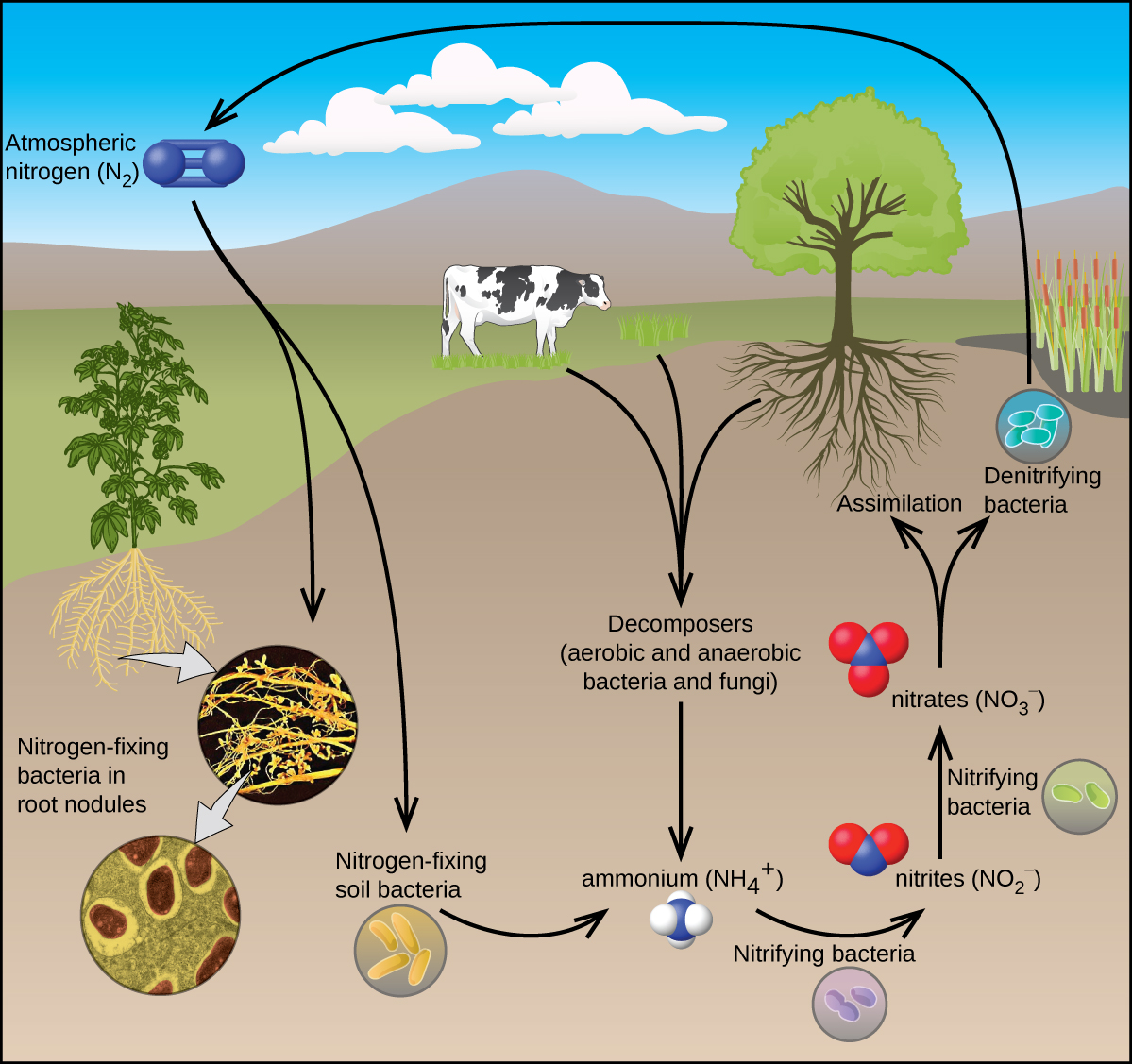 Nitrogen fixation is the process where organisms convert atmospheric nitrogen into biologically useful chemicals. To date, the only known kind of biological organisms capable of nitrogen fixation are microorganisms. These organisms employ enzymes called nitrogenases, which contain iron and molybdenum. Many of these microorganisms live in a symbiotic relationship with plants, with the best-known example being the presence of rhizobia in the root nodules of legumes.

Large volumes of atmospheric nitrogen are necessary for making ammonia—the principal starting material used for preparation of large quantities of other nitrogen-containing compounds. Most other uses for elemental nitrogen depend on its inactivity. It is helpful when a chemical process requires an inert atmosphere. Canned foods and luncheon meats cannot oxidize in a pure nitrogen atmosphere, so they retain a better flavor and color, and spoil less rapidly, when sealed in nitrogen instead of air. This technology allows fresh produce to be available year-round, regardless of growing season.

There are compounds with nitrogen in all of its oxidation states from 3− to 5+. Much of the chemistry of nitrogen involves oxidation-reduction reactions. Some active metals (such as alkali metals and alkaline earth metals) can reduce nitrogen to form metal nitrides. In the remainder of this section, we will examine nitrogen-oxygen chemistry.

There are well-characterized nitrogen oxides in which nitrogen exhibits each of its positive oxidation numbers from 1+ to 5+. When ammonium nitrate is carefully heated, nitrous oxide (dinitrogen oxide) and water vapor form. Stronger heating generates nitrogen gas, oxygen gas, and water vapor. No one should ever attempt this reaction—it can be very explosive. In 1947, there was a major ammonium nitrate explosion in Texas City, Texas, and, in 2013, there was another major explosion in West, Texas. In the last 100 years, there were nearly 30 similar disasters worldwide, resulting in the loss of numerous lives. In this oxidation-reduction reaction, the nitrogen in the nitrate ion oxidizes the nitrogen in the ammonium ion. Nitrous oxide, shown in (Figure), is a colorless gas possessing a mild, pleasing odor and a sweet taste. It finds application as an anesthetic for minor operations, especially in dentistry, under the name “laughing gas.”

Nitrous oxide, N2O, is an anesthetic that has these molecular (left) and resonance (right) structures.

Gaseous nitric oxide is the most thermally stable of the nitrogen oxides and is the simplest known thermally stable molecule with an unpaired electron. It is one of the air pollutants generated by internal combustion engines, resulting from the reaction of atmospheric nitrogen and oxygen during the combustion process.

At room temperature, nitric oxide is a colorless gas consisting of diatomic molecules. As is often the case with molecules that contain an unpaired electron, two molecules combine to form a dimer by pairing their unpaired electrons to form a bond. Liquid and solid NO both contain N2O2 dimers, like that shown in (Figure). Most substances with unpaired electrons exhibit color by absorbing visible light; however, NO is colorless because the absorption of light is not in the visible region of the spectrum.

This shows the equilibrium between NO and N2O2. The molecule, N2O2, absorbs light.

Dinitrogen trioxide, N2O3, only exists in liquid or solid states and has these molecular (left) and resonance (right) structures.

The reaction of copper metal with concentrated HNO3 produces a solution of Cu(NO3)2 and brown fumes of NO2. (credit: modification of work by Mark Ott)

The nitrogen dioxide molecule (illustrated in (Figure)) contains an unpaired electron, which is responsible for its color and paramagnetism. It is also responsible for the dimerization of NO2. At low pressures or at high temperatures, nitrogen dioxide has a deep brown color that is due to the presence of the NO2 molecule. At low temperatures, the color almost entirely disappears as dinitrogen tetraoxide, N2O4, forms. At room temperature, an equilibrium exists: 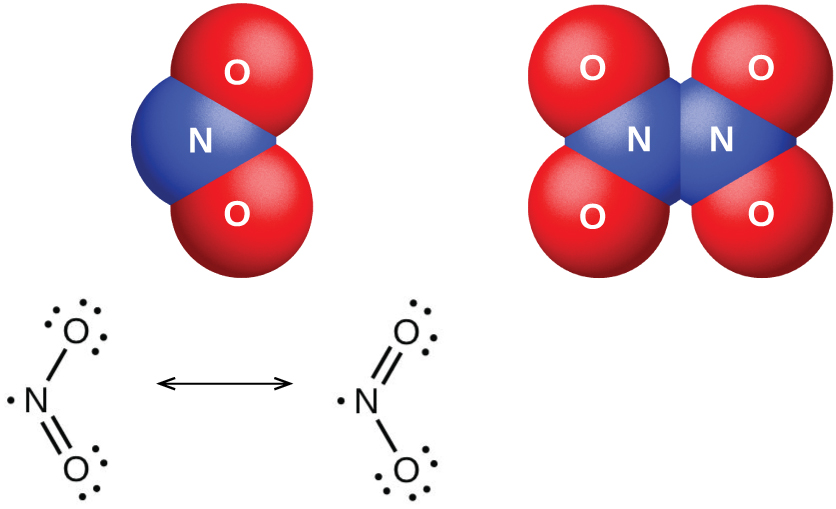 Dinitrogen pentaoxide, N2O5 (illustrated in (Figure)), is a white solid that is formed by the dehydration of nitric acid by phosphorus(V) oxide (tetraphosphorus decoxide):

It is unstable above room temperature, decomposing to N2O4 and O2.

This image shows the molecular structure and one resonance structure of a molecule of dinitrogen pentaoxide, N2O5.

The nitrogen oxides exhibit extensive oxidation-reduction behavior. Nitrous oxide resembles oxygen in its behavior when heated with combustible substances. N2O is a strong oxidizing agent that decomposes when heated to form nitrogen and oxygen. Because one-third of the gas liberated is oxygen, nitrous oxide supports combustion better than air (one-fifth oxygen). A glowing splinter bursts into flame when thrust into a bottle of this gas. Nitric oxide acts both as an oxidizing agent and as a reducing agent. For example:

Nitrogen dioxide (or dinitrogen tetraoxide) is a good oxidizing agent. For example:

Nitrogen exhibits oxidation states ranging from 3− to 5+. Because of the stability of the N≡N triple bond, it requires a great deal of energy to make compounds from molecular nitrogen. Active metals such as the alkali metals and alkaline earth metals can reduce nitrogen to form metal nitrides. Nitrogen oxides and nitrogen hydrides are also important substances.

Write the Lewis structures for each of the following:

Explain how ammonia can function both as a Brønsted base and as a Lewis base.

Determine the oxidation state of nitrogen in each of the following. You may wish to review the chapter on chemical bonding for relevant examples.

For each of the following, draw the Lewis structure, predict the ONO bond angle, and give the hybridization of the nitrogen. You may wish to review the chapters on chemical bonding and advanced theories of covalent bonding for relevant examples.

Nitrogen is sp hybridized. The molecule has a linear geometry with an ONO bond angle of 180°.

How many grams of gaseous ammonia will the reaction of 3.0 g hydrogen gas and 3.0 g of nitrogen gas produce?

Although PF5 and AsF5 are stable, nitrogen does not form NF5 molecules. Explain this difference among members of the same group.

Nitrogen cannot form a NF5 molecule because it does not have d orbitals to bond with the additional two fluorine atoms.

The equivalence point for the titration of a 25.00-mL sample of CsOH solution with 0.1062 M HNO3 is at 35.27 mL. What is the concentration of the CsOH solution?