“I’ve a grand memory for forgetting,” quipped Robert Louis Stevenson. refers to loss of information from long-term memory. We all forget things, like a loved one’s birthday, someone’s name, or where we put our car keys. As you’ve come to see, memory is fragile, and forgetting can be frustrating and even embarrassing. But why do we forget? To answer this question, we will look at several perspectives on forgetting.

Sometimes memory loss happens before the actual memory process begins, which is encoding failure. We can’t remember something if we never stored it in our memory in the first place. This would be like trying to find a book on your e-reader that you never actually purchased and downloaded. Often, in order to remember something, we must pay attention to the details and actively work to process the information (effortful encoding). Lots of times we don’t do this. For instance, think of how many times in your life you’ve seen a nickel. Can you accurately recall what the front of a U.S. nickel looks like? When researchers Raymond Nickerson and Marilyn Adams (1979) asked this question, they found that most Americans don’t know which one it is. The reason is most likely encoding failure. Most of us never encode the details of the nickel. We only encode enough information to be able to distinguish it from other coins. If we don’t encode the information, then it’s not in our long-term memory, so we will not be able to remember it.

Psychologist Daniel Schacter (2001), a well-known memory researcher, offers seven ways our memories fail us. He calls them the seven sins of memory and categorizes them into three groups: forgetting, distortion, and intrusion (Table 1).

Let’s look at the first sin of the forgetting errors: , which means that memories can fade over time. Here’s an example of how this happens. Nathan’s English teacher has assigned his students to read the novel To Kill a Mockingbird. Nathan comes home from school and tells his mom he has to read this book for class. “Oh, I loved that book!” she says. Nathan asks her what the book is about, and after some hesitation she says, “Well . . . I know I read the book in high school, and I remember that one of the main characters is named Scout, and her father is an attorney, but I honestly don’t remember anything else.” Nathan wonders if his mother actually read the book, and his mother is surprised she can’t recall the plot. What is going on here is storage decay: unused information tends to fade with the passage of time.

In 1885, German psychologist Hermann Ebbinghaus analyzed the process of memorization. First, he memorized lists of nonsense syllables. Then he measured how much he learned (retained) when he attempted to relearn each list. He tested himself over different periods of time from 20 minutes later to 30 days later. The result is his famous forgetting curve (Figure 2). Due to storage decay, an average person will lose 50% of the memorized information after 20 minutes and 70% of the information after 24 hours (Ebbinghaus, 1885/1964). Your memory for new information decays quickly and then eventually levels out.

Are you constantly losing your cell phone? Have you ever driven back home to make sure you turned off the stove? Have you ever walked into a room for something, but forgotten what it was? You probably answered yes to at least one, if not all, of these examples—but don’t worry, you are not alone. We are all prone to committing the memory error known as absentmindedness. These lapses in memory are caused by breaks in attention or our focus being somewhere else.

Cynthia, a psychologist, recalls a time when she recently committed the memory error of .

When I was completing court-ordered psychological evaluations, each time I went to the court, I was issued a temporary identification card with a magnetic strip which would open otherwise locked doors. As you can imagine, in a courtroom, this identification is valuable and important and no one wanted it to be lost or be picked up by a criminal. At the end of the day, I would hand in my temporary identification. One day, when I was almost done with an evaluation, my daughter’s day care called and said she was sick and needed to be picked up. It was flu season, I didn’t know how sick she was, and I was concerned. I finished up the evaluation in the next ten minutes, packed up my tools, and rushed to drive to my daughter’s day care. After I picked up my daughter, I could not remember if I had handed back my identification or if I had left it sitting out on a table. I immediately called the court to check. It turned out that I had handed back my identification. Why could I not remember that? (personal communication, September 5, 2013)

When have you experienced absentmindedness?

“I just went and saw this movie called Oblivion, and it had that famous actor in it. Oh, what’s his name? He’s been in all of those movies, like The Shawshank Redemption and The Dark Knight trilogy. I think he’s even won an Oscar. Oh gosh, I can picture his face in my mind, and hear his distinctive voice, but I just can’t think of his name! This is going to bug me until I can remember it!” This particular error can be so frustrating because you have the information right on the tip of your tongue. Have you ever experienced this? If so, you’ve committed the error known as blocking: you can’t access stored information (Figure 3).

Now let’s take a look at the three errors of distortion: misattribution, suggestibility, and bias. Misattribution happens when you confuse the source of your information. Let’s say Alejandro was dating Lucia and they saw the first Hobbit movie together. Then they broke up and Alejandro saw the second Hobbit movie with someone else. Later that year, Alejandro and Lucia get back together. One day, they are discussing how the Hobbit books and movies are different and Alejandro says to Lucia, “I loved watching the second movie with you and seeing you jump out of your seat during that super scary part.” When Lucia responded with a puzzled and then angry look, Alejandro realized he’d committed the error of misattribution.

What if someone is a victim of rape shortly after watching a television program? Is it possible that the victim could actually blame the rape on the person she saw on television because of misattribution? This is exactly what happened to Donald Thomson.

Australian eyewitness expert Donald Thomson appeared on a live TV discussion about the unreliability of eyewitness memory. He was later arrested, placed in a lineup and identified by a victim as the man who had raped her. The police charged Thomson although the rape had occurred at the time he was on TV. They dismissed his alibi that he was in plain view of a TV audience and in the company of the other discussants, including an assistant commissioner of police. . . . Eventually, the investigators discovered that the rapist had attacked the woman as she was watching TV—the very program on which Thomson had appeared. Authorities eventually cleared Thomson. The woman had confused the rapist’s face with the face that she had seen on TV. (Baddeley, 2004, p. 133)

The second distortion error is suggestibility. Suggestibility is similar to , since it also involves false memories, but it’s different. With misattribution you create the false memory entirely on your own, which is what the victim did in the Donald Thomson case above. With suggestibility, it comes from someone else, such as a therapist or police interviewer asking leading questions of a witness during an interview.

Memories can also be affected by , which is the final distortion error. Schacter (2001) says that your feelings and view of the world can actually distort your memory of past events. There are several types of bias: Stereotypical bias involves racial and gender biases. For example, when Asian American and European American research participants were presented with a list of names, they more frequently incorrectly remembered typical African American names such as Jamal and Tyrone to be associated with the occupation basketball player, and they more frequently incorrectly remembered typical White names such as Greg and Howard to be associated with the occupation of politician (Payne, Jacoby, & Lambert, 2004). Egocentric bias involves enhancing our memories of the past (Payne et al., 2004). Did you really score the winning goal in that big soccer match, or did you just assist? Hindsight bias happens when we think an outcome was inevitable after the fact. This is the “I knew it all along” phenomenon. The reconstructive nature of memory contributes to hindsight bias (Carli, 1999). We remember untrue events that seem to confirm that we knew the outcome all along. 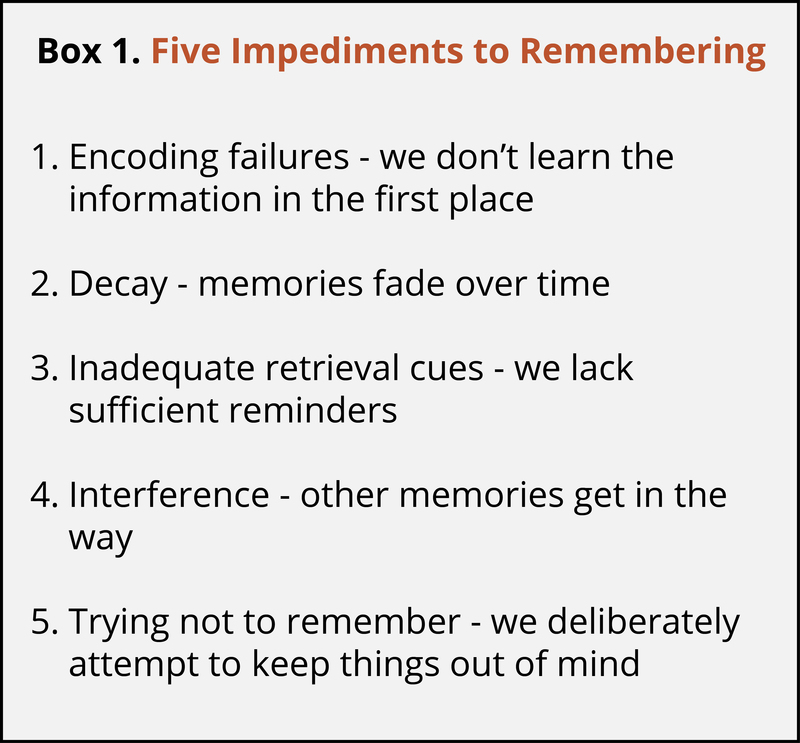 Have you ever had a song play over and over in your head? How about a memory of a traumatic event, something you really do not want to think about? When you keep remembering something, to the point where you can’t “get it out of your head” and it interferes with your ability to concentrate on other things, it is called . It’s Schacter’s seventh and last memory error. It’s actually a failure of our memory system because we involuntarily recall unwanted memories, particularly unpleasant ones (Figure 4). For instance, you witness a horrific car accident on the way to work one morning, and you can’t concentrate on work because you keep remembering the scene.

Alternatively, some memories may be forgotten because we deliberately attempt to keep them out of mind. Over time, by actively trying not to remember an event, we can sometimes successfully keep the undesirable memory from being retrieved either by inhibiting the undesirable memory or generating diversionary thoughts (Anderson & Green, 2001). Imagine that you slipped and fell in your high school cafeteria during lunch time, and everyone at the surrounding tables laughed at you. You would likely wish to avoid thinking about that event and might try to prevent it from coming to mind. One way that you could accomplish this is by thinking of other, more positive, events that are associated with the cafeteria. Eventually, this memory may be suppressed to the point that it would only be retrieved with great difficulty (Hertel & Calcaterra, 2005).

Sometimes information is stored in our memory, but for some reason it is inaccessible. This is known as interference, and there are two types: and (Figure 5). Have you ever gotten a new phone number or moved to a new address, but right after you tell people the old (and wrong) phone number or address? When the new year starts, do you find you accidentally write the previous year? These are examples of proactive interference: when old information hinders the recall of newly learned information. Retroactive interference happens when information learned more recently hinders the recall of older information. For example, this week you are studying Freud’s Psychoanalytic Theory. Next week you study the humanistic perspective of Maslow and Rogers. Thereafter, you have trouble remembering part of Freud’s theory, his Psychosexual Stages of Development, because you can only remember Maslow’s Hierarchy of Needs.

For additional review, watch the CrashCourse psychology video on remembering and forgetting.

Which of the seven memory errors presented by Schacter have you committed? Provide an example of each one.

loss of information from long-term memory

memory error in which you confuse the source of your information

failure of the memory system that involves the involuntary recall of unwanted memories, particularly unpleasant ones