As noted earlier in this module, every year organizations conduct analyses and publish lists of the world’s top brands. Forbes publishes a list of the most valuable brands in terms of dollar value. Interbrand analyzed what Business Insider called the most powerful brands in terms of the companies’ “financial performance, their role in purchasing decisions, and their competitive strength.”[1] The results are summarized in the following table:

Most of the brands on both lists are household names. Not surprising in our present information age, technology companies are heavily represented on both the most valuable brand list and the most powerful brand list.

All of these brands offer products and services that have created, shaped, or fundamentally redefined the categories in which they operate. What sets these companies apart from their competitors who didn’t make the list is how they have invested in brand building to support their broader corporate goals for growth and success.

Behind the Power Brand: LEGO

Toymaker LEGO provides a great example of the brand-alignment and brand-building strategies explored in this module. Anyone who has wandered through the LEGO section of a toy store or a department store knows that the company understands its target audiences very well: young children (ages 1.5 to 11) who like to build things and parents who want to guide their children’s development and success—in other words, virtually all children and all parents.

LEGO articulates perfectly the brand promise its toys deliver to these audiences: Joy of building, pride of creation. As illustrated in the LEGO Brand Framework (see Figure 1, below), the company values are in step with this promise: imagination, creativity, fun, learning, caring, and quality. 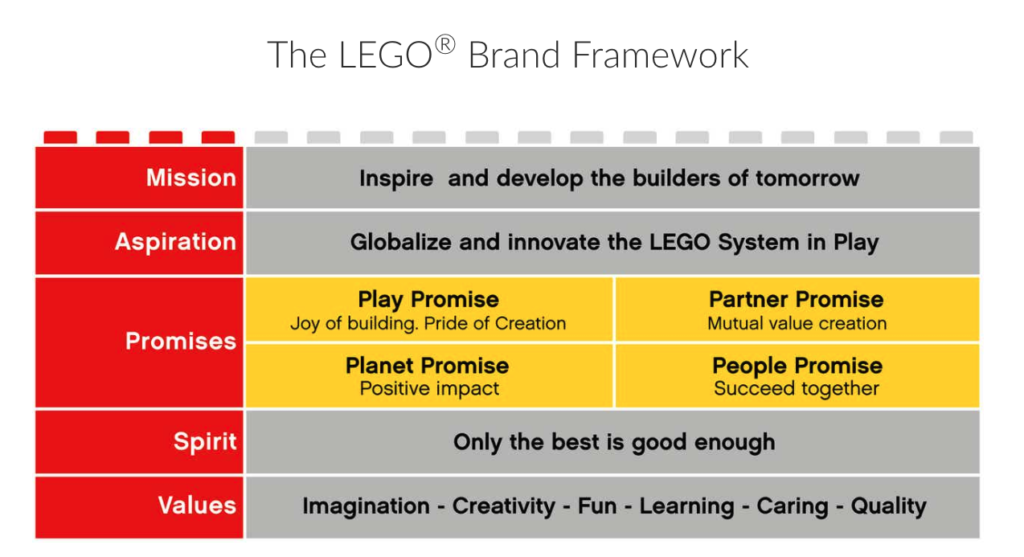 The company has also developed a fairly elaborate definition–and a name–for its brand personality: My LEGO Friend. What is this friend like?

My LEGO friend . . . has a vivid imagination . . . is curious and likes to try out new things . . . is always positive and optimistic . . . is fun to be around with . . . enjoys bringing people together . . . is friendly and approachable . . . is caring for others . . . doesn’t get bothered by the little things . . . can comfortably adapt to play different roles[4]

With such a clear articulation of its brand promise, brand personality, and the related benefits it aspires to deliver, LEGO employees have clear guidance about what they need to accomplish. The next step is to effectively deliver on the brand promise with products, services, and marketing activities that guarantee that children and their parents will experience joy and pride in connection with LEGO Bricks. Here is just a sampling:

It is worth noting that LEGO considers seriously only the activities that are in keeping with its brand, but also the activities that might undermine it. In October 2015, the Chinese dissident artist Ai Weiwei tried to place a bulk order of LEGO bricks for an art exhibition he was planning at the National Gallery of Victoria, Australia, on the subject of free speech. Somewhat surprisingly for many LEGO fans, the company declined Weiwei’s request.

According to the artist, the company indicated that “they cannot approve the use of LEGOs for political works.” This explanation was later confirmed by a company spokesman.

Weiwei went on to denounce the company publicly in social media, accusing it of censorship and discrimination. He also suggested that LEGO’s decision was motivated by trying to protect its commercial interests in China. In response to the social media flurry, many LEGO owners offered to donate their bricks to help Weiwei complete the project. Donation centers were set up in eleven cities (including Beijing) to help the artist’s cause. LEGO itself faced public criticism from longtime fans who were disappointed by its decision. People cited other artistic projects with political themes that LEGO had supported, complaining about the company’s apparently inconsistent behaviour.[5]

So why would LEGO make this decision, and how does it relate to brand management? The company was concerned about politicizing its brand and product, and it didn’t want to get embroiled in a controversy that might overshadow the universal, positive experience at LEGO’s core: Joy of building, pride of creation.

Then, in January 2016, the Weiwei vs. LEGO story broke again, but this time with a different ending. In the intervening weeks, the artist had continued to lobby LEGO’s executive leadership to change their position, and eventually they agreed.[6] When people submit bulk order requests, the company will no longer inquire about the “thematic purpose” of the project. Instead, it will simply require any publicly displayed works to make it clear that LEGO does not endorse or support the project. According to a company statement,

Previously, when asked to sell very large quantities of LEGO® bricks for projects, the LEGO Group has asked about the thematic purpose of the project. This has been done, as the purpose of the LEGO Group is to inspire children through creative play, not to actively support or endorse specific agendas of individuals or organizations.

However, those guidelines could result in misunderstandings or be perceived as inconsistent, and the LEGO Group has therefore adjusted the guidelines for sales of LEGO bricks in very large quantities. As of January 1st, the LEGO Group no longer asks for the thematic purpose when selling large quantities of LEGO bricks for projects. Instead, the customers will be asked to make it clear – if they intend to display their LEGO creations in public – that the LEGO Group does not support or endorse the specific projects.[7]

With the opportunity for deeper consideration, LEGO found a new policy that is consistent with its brand promise and purpose of supporting creative activity, while at the same time protecting the LEGO brand from being politicized.

Navigating the complexities of brand management is never simple. As LEGO discovered, even hard-core fans may turn away from a beloved brand. However, brand building is a long-term endeavor. Over time, most super-brands demonstrate that staying true to consistent, well-designed brand positioning pays off.