Consider the following observation by the ECI on the results of the National Business Ethics survey:

Managers–those expected to act as role models or enforce discipline–are responsible for a large share of workplace misconduct (60 percent) and senior managers are more likely than lower-level managers to break rules. Surveyed employees said that members of management are responsible for six of every ten instances of misconduct and they pointed the finger at senior managers in 24 percent of observed rule breaking. Middle managers were identified as the culprit 19 percent of the time and first-line supervisors were identified as bad actors 17 percent of the time.

If you’re thinking about ways of boosting or ensuring ethical behaviour in an organization, this is an interesting and alarming finding. In a supplemental report on Ethical Leadership, ECI reports that employees at all sizes of companies draw conclusions about their leaders’ character primarily on the basis of the following: 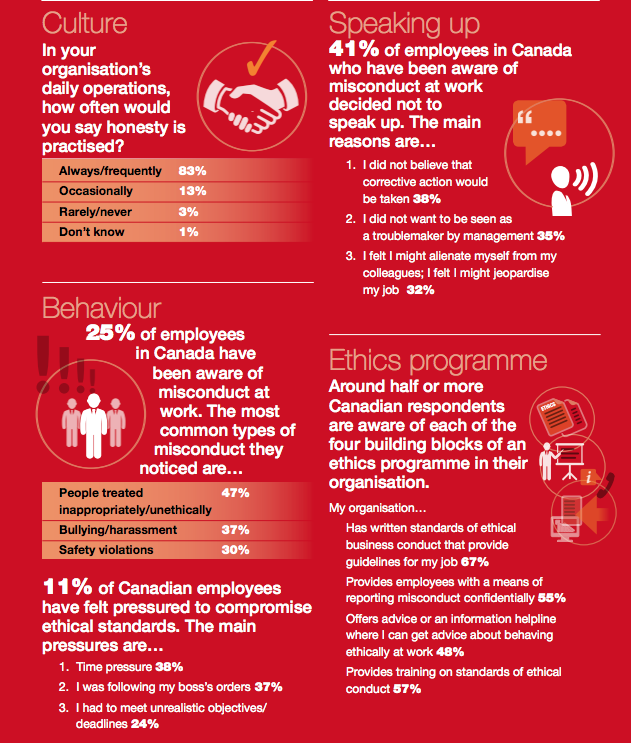 Employees want to know, for example, whether leaders treat lower-level employees with dignity and respect, share credit when good things happen, and uphold standards even when it reduces revenues and profits. They watch to see whether leaders are steady in crisis, hold themselves accountable or, alternatively, shift blame to others. Workers also look at day-to-day management decisions to gauge whether ethical behaviour is recognized and rewarded, or whether praise and promotions go to workers who bend the rules.

These findings suggest the important role that executives play in building ethical organizations—ethics and integrity tend to start (or fail) at the top and trickle down.

When executives establish specific, measurable objectives for the company, those objectives determine where people will focus their time and effort. When the objectives cannot be met and there are dire personal consequences for failure, such conditions can lead to the compromise of ethics and standards. In the National Business Ethics Survey, 70 percent of employees identified pressure to meet unrealistic business objectives as most likely to cause them to compromise their ethical standards, and 75 percent identified either their senior or middle management as the primary source of pressure they feel to compromise the standards of their organizations.

In the Volkswagen case, internal investigations have questioned how both the company culture and the behaviour of former CEO Martin Winterkorn contributed to a systemic ethical breach. Like many chief executives, Martin Winterkorn was a demanding boss who didn’t like failure, but critics say the pressure on managers at Volkswagen was unusual, which may go some way toward explaining the carmaker’s crisis. When he became CEO in 2007, Winterkorn set an objective to make VW the world’s biggest carmaker, which would require tremendous growth in the highly competitive U.S. car market. In the years since, VW has nearly doubled its global annual sales to 10 million cars and its revenue to $225 billion. In early 2015, VW finally approached its goal, selling marginally more vehicles than the world’s number-one automaker, Toyota of Japan. One former sales executive said that the pressure soared under the target.” If you didn’t like it, you moved of your own accord or you were performance-managed out of the business,” he said.[2]

In describing a Winterkorn’s leadership style, a former VW executive confidentially told Reuters New Agency, “There was always a distance, a fear and a respect . . . If he would come and visit or you had to go to him, your pulse would go up. If you presented bad news, those were the moments that it could become quite unpleasant and loud and quite demeaning.”

A week after U.S. regulators revealed the company’s cheating, Bernd Osterloh, the employee representative on VW’s supervisory board, sent a letter to VW staff suggesting the change that was needed: “We need in the future a climate in which problems aren’t hidden but can be openly communicated to superiors,” said Osterloh. “We need a culture in which it’s possible and permissible to argue with your superior about the best way to go.”[3]

In Fortune magazine, Dr. Paul Argenti suggested, “Rather than playing the blame game, executives should ask if pressures to grow at all costs might have created dishonest employees.”[4]

It seems likely that aggressive corporate objectives (and more specifically marketing objectives related to market share) played a contributing role in the Volkswagen ethics scandal. Moreover, when executives set aggressive goals, it becomes more important to cultivate communication channels to openly address issues. This was obviously not the case at Volkswagen.

In the previous reading we reviewed a number of company policies that address ethical conduct. Executives play an important role in creating those policies—and by visibly following and upholding them. As the survey data cited above suggest, employees look to executives to decide whether standards-of-business-conduct policies should be observed and respected. When executives bend the rules or turn a blind eye to bad behaviour, the policies lose value and executives lose the respect of employees. This opens the door to a range of unanticipated issues, as employees look to ethical norms outside stated policy and beyond the executives’ control.

Apart from the laws and regulations, the investigative powers of the press can reveal questionable marketing practices. While trust-building is the intent of all ethical behaviours, there are particular industries that it is paramount in such as: the Food and Drug, Health and Financial Services sectors. In 2017, it appears the pressure to deliver profits created an environment at one of Canada’s largest banks revealed an ethical dilemma for many TD employees. They felt that it was difficult to maintain client’s trust and focus on their best interests while meeting their employer’s sales targets. Targets were set by executives and managers. Watch the two videos to see how a “widespread culture” across all the Canadian major banks provoked a review by the watchdog Financial Consumer Agency Commission (FCAC). No CEO of any bank in the CBC “Go Public” investigation was willing to be interviewed. [5]

Internal promotions send very strong signals about what is important to a company. When the company hires an employee from a different company, she is likely not well known by most employees. If the company promotes an employee who is already working at the company, others know him and understand what he has done to deserve the promotion. If the company promotes individuals to management positions when they have displayed questionable ethics in the workplace, it creates two issues. First, it creates a level of managers who are more likely to encourage their employees to achieve business results at any cost, even when ethics are compromised. Second, it sends a message to all employees that business results are more important than ethics.